The Lagos State government has upgraded the charge against one John Edobor, a former staff of Zenith Bank Plc., from assault to attempted murder, SaharaReporters reports.

State prosecutor, Ipaye Nwachukwu made this known to the chief magistrate of Surulere Magistrate Court 1, on Friday, November 11.

The charge was amended after a police source claimed that the suspect had a knife on him when he was arrested. The source also said that the level of damage done to the victim was more than an assault, and is being seen as an armed attack.

Edobor, was reported to have allegedly hit his wife of 9 years with a metal rod, breaking her leg in the process.

He was reportedly fired this week following the latest development.

Ivie said she was with her friend in front of her residence in Surulere, Lagos, when she was accosted by Edobor, who came with some touts. Ivie said she initially thought the men in the company of her estranged husband were robbers until she saw that they were being led by him.

“Before we could react, a group of area boys attacked us. They held my friend down on the floor, giving John the opportunity to focus his attack on me. He tried to hit me on the head with a metal bar, but I shielded myself. I landed on the floor with my legs extended where he proceeded to hit me on the legs continuously with the metal,” she said.

Luckily, her neighbours intervened, but not early enough to prevent the damage to Ivie’s two legs.

“The injury was so severe that my broken bone tore through my skin puncturing an artery in the process. Almost three months and two surgeries later, I have titanium plates and screws to keep my leg in place, and I am unable to use my right leg,” she disclosed.

Ivie alleged that she was thrown out of her matrimonial home, following the collapse of her business and her inability to give Edobor a son.

She added that while she was still dealing the trauma of her failed business, which landed her in debt, Edobor started an affair with another woman and started flaunting it on social media

John is said to have removed his daughters as beneficiaries of his medical insurance package and has requested that they are taken to his village to continue their education. 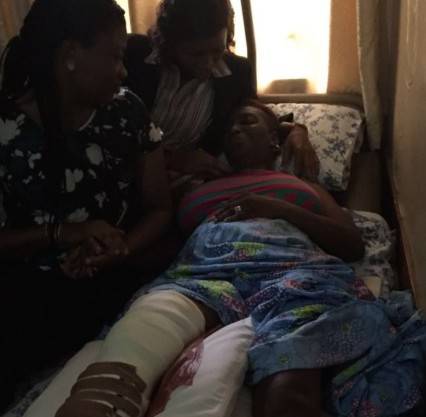 The victim at the hospital | Photo Sahara reporters

Benjamin Odeh, the victims lawyer has also filed another suit at the Lagos State High Court for dissolution of the union, and is asking the court to order the suspect to pay alimony.

Edobor confirmed to SaharaReporters that he has been fired, adding that he never harmed his wife.

He said that a man, Matthew Agbaire, who drove his wife to their residence was the one who hit her while trying to hit him (Edobor).

Edobor also accused the victim of adultery and claimed that she had aborted a pregnancy because she did not know who the father was.

An eyewitness, Ibiso Kama, claimed that the suspect was lying when he said he did not hit his wife, because he (Edobor) had approached him to beg his wife while she was still at the hospital.

“I am surprised that John (Edobor) is denying that he did not attack his wife. He sent me different messages asking me to beg his wife for him. He hit her with a metal object that looked like a shock absorber for a car.

I jumped down from my apartment to rescue the woman because the gate had been locked at the time. It was around 11 pm. All the boys in the area can attest that (Edobor) had been there since the afternoon, buying drinks from the boys. He told them his wife was cheating on him in the apartment he rented for her,” Kama said.