Skip to content
Every Business Information Politics Proudly A Woman The Africa Support and Empowerment Initiative (AFRISEI) has rejected allegations of franchise infringement by the Bring Back Our Girls (BBOG) group, led by former Education Minister, Dr. Oby Ezekwesili.

This is contained in a statement co-signed by the President and Secretary of the NGO, Hajiya Hadiza Buhari-Bello, a daughter of President Muhammadu Buhari, and Don Uche, respectively.

The BBOG advocacy group via a statement jointly signed by Aisha Yesufu and Oby Ezekwesili had dissociated BBOG group from a fund-raising event organised by Buhari-Bello.

The event tagged: “Official Inauguration and Signing of Memorandum of Understanding (MOU) on the Chibok Girls Endowment Project”, took place at the Peace Corps of Nigeria premises, Abuja, on Oct. 17, with the #BringBackOurGirls inscription on the backdrop.

While demanding an immediate retraction and unreserved apology from the organisers of the event, the BBOG also urged the general public to disregard attempts at linking the group to the event.

However, Hadiza Buhari-Bello and Uche stated that contrary to Yesufu and Ezekwesili’s allegation, AFRISEI did not need to lean on the BBOG to be of service to the Chibok Girls.

They maintained that they had no reason “to steal anything from BBOG or use its name to achieve any advantage. 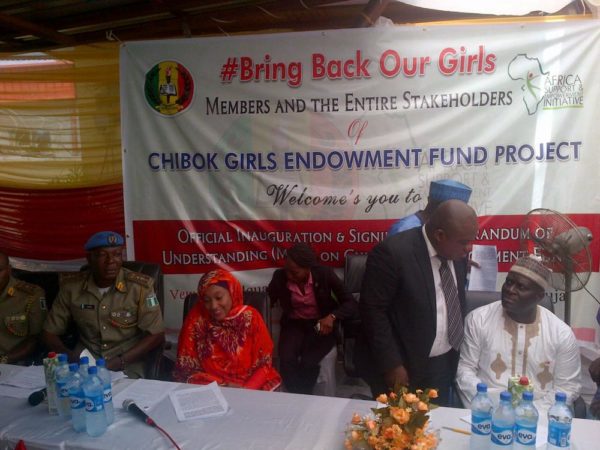 “The Africa Support and Empowerment Initiative has its own defined objectives and that it didn’t need to steal anybody’s ideas to operate in line with its own objectives,” they said.

While praising the activities of the BBOG to raise and sustain awareness about the plight of the kidnapped Chibok schoolgirls, the President’s daughter said that their organisation had broader objectives beyond the Chibok girls.

They said though the Chibok girls were within the priority of their organisation, their commitments to humanitarian causes did not end with Chibok schoolgirls.

“Given the size of the problem at hand, the more organisations we have assisting Chibok and other devastated communities, the better for the country,’’ they said.

According to them, as a charitable organisation, AFRISEI is committed to empowering the youth and the less privileged in the area of job creation and skill acquisition.

“It is also committed to supporting the education of the less privileged students, giving material support to the downtrodden; the internally displaced persons.

“AFRISEI is committed to educating the masses to discourage unhealthy practices such as child trafficking, child abuse, child labour and gender discrimination.”

The AFRISEI president and secretary said there was no law that prevented their organisation from assisting the Chibok schoolgirls, adding that as a charity organisation, they offered help to people in distress, including the Chibok girls and the Boko Haram victims.

They noted that AFRISEI was duly registered with the Corporate Affairs Commission and issued certificate of incorporation on July 14, and hence would never engage in illegal activities by stealing someone else’s franchise