This is just so heartbreaking.

A 4-year-old girl was reportedly murdered by her father because he was angry about her mother’s new boyfriend.

According to reports, 26-year old Tarel Felder picked up his daughter, Amyira, from her mom’s house in Louisiana and brought her to his mother’s house in Katy. They had been there for a few days.

His mother told the police that she left to run an errand on Thursday night and came home to find her son dead and her granddaughter wounded. Amyira was rushed by Life Flight to Memorial Hermann Hospital, but doctors couldn’t save her.

On Thursday afternoon, Tarel Felder posted a video on Instagram where he can be heard saying that God came and talked to him the night before and it was like nothing he’d ever experienced. He can also be heard beckoning for his daughter who answers in the background. He concludes the video with “I’ve seen it all, you heard me? I’m through with the game. I’m through with it. Done with it. You heard me? Y’all can have her.”

According to police, Tarel Felder was upset that his ex and mother of his daughter, Shonique Johnson, was living in Louisiana and had a new boyfriend. Felder and Johnson had been together for 4 years and their daughter Amyira was born in 2012.

The young girl’s mother says that on the morning of the shooting her ex called her to tell her he wanted to get back together but she firmly told him she moved on and this is when he became angry.

Family members have started a GoFundMe page to help raise some money for the girl’s funeral, one that has already attracted more than $4,000 toward the $10,000 goal. 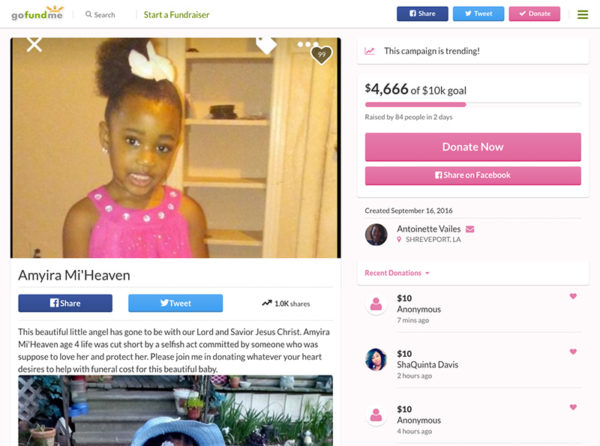