The Inspector-General of Police Special Intelligence Response Team (IRT) has arrested the alleged mastermind of the abduction of a former federal lawmaker and Minister of Education, Senator Iyabo Anisulowo, PUNCH reports.

She spent 10 days in captivity before she was rescued. Two suspects nabbed during her rescue gave information that led to the arrest of their leader, Ikechukwu Daniel, 28.

The suspect, has revealed that he and his gang had planned to kidnap oil mogul,Femi Otedola.

According to the suspect, he and his gang planned to kidnap Otedola at a function in Ibadan, Oyo State in November 2015, but called off their attempt due to the presence of security operatives.

“It would have been impossible because the security there was heavy that day. We decided to take our time and prepare well for the operation,” he said.

He said that one of Otedola’s aides brought them the job.

“The person told us that he was going to be in Ibadan and when we went there, we realised that there was heavy security presence around him. I told my gang members that we had to prepare well for the operation to be successful.

I told them we needed to do a sacrifice and fortify ourselves spiritually before attempting to kidnap him.

Then, we decided that we also needed army, DSS and police uniforms because without impersonation, there was no way we could get him.

The man who brought the job was supposed to monitor his movements regularly. I already planned that if we abducted him successfully, it would have been my last job because I would have demanded N2bn and maybe we would have negotiated for N500m,”he said.

But that would never be. Police captured Daniel, whose gang was said to have become a terror in the South West. 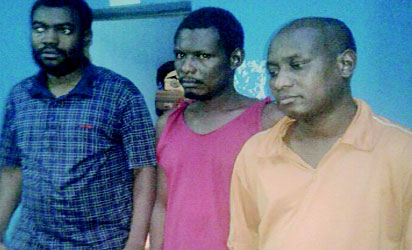 Ikechukwu and his gang | Photo: Vanguard

The IRT arrested one Mohammed Babuga, 32, who provided information that aided the operatives in trailing Ikechukwu to his hideout in Festac Area of Lagos State.

He was subsequently apprehended while negotiating a N4m ransom from relatives of another victim in his gang’s custody.

Sources at the IRT disclosed that Daniel, a native of Imo state, is an ICT expert coaching Fulani kidnappers on the use the ICT in evading arrest.

Daniel said his journey into the world of kidnapping started in 2014 after he was released from the Agodi Prison, Ibadan, Oyo State.

He said that he was arrested in 2012 for hijacking a petroleum tanker truck on the Lagos-Ibadan Expressway, adding that he speaks Hausa fluently.

“While I was in prison, I realised that inmates were still arranging criminal jobs from the prison,” he said.

Daniel said after he was discharged from the Agodi Prison for want of evidence against him, Babuga who was his cellmate, told him the way to make money was for him to join a kidnapping gang.

“Mohammed Babuga had been discharged from prison ahead of me. When I first started, all I was doing was negotiating ransom anytime we kidnapped anybody.

When we kidnapped the woman (Senator Anisulowo) I was the one who ensured that the woman was not killed because her family refused to pay ransom for her release.”

The first person we kidnapped was a man whose name I cannot remember. We kept him in a forest in Ilorin, Kwara State and got N5m as ransom.

In details, he narrated what took place during the time, Senator Anisulowo was being held by the gang. Daniel said his members initially did not carry him along in the job.

Explaining what happened when they held Anisulowo, Ikechukwu said:

They told me that they were expecting to get nothing less than N50m. But after the family of the senator refused to pay the money and police were conducting raids all over the place, they decided to eliminate the woman.

Police helicopter was hovering all over the place. My gang members then called me and said they wanted to kill the woman.

I begged them for two days because they respect and listen to me.  Luckily for the woman, she was released and they all ran away. The Fulani boys would have hacked her to death.

Ikechukwu claimed that to get information, he contracted one of his friends, who is a hacker, to gain access into DSS and police websites.

“Through that, I was able to understand their methods. Before I was arrested, I already knew the police was looking for me. But I thought I would continue to escape them because I understood how they worked,” he said.

Babuga, a native of Kebbi State, said he was arrested in 2011 during a robbery operation along Kaduna Road in Kwara State.

“It was my third robbery operation at the time some vigilantes in Ilorin arrested us and handed us over to the police. We were charged to court and I was remanded in prison. When I left Prison, I joined a kidnap gang,” he said.